Choice paralysis by overload: the surprising impact of offering a lot of options to customers

Intuitively we tend to assume that the more variety of products we offer, the higher the chances that our customers will find the one that matches their needs exactly, and therefore, the easier it will be to make a sale. But is that really true?

In today’s post, we’ll see a couple of choice experiments that put that into question, by looking at the impact that an extensive array of product options can have on the chances that customers make a purchase, in a scenario where not buying anything is an option.

The hypothesis being tested in these studies: offering people too many options to choose from, instead of increasing people's happiness, leads to choice paralysis due to overload.

What is choice overload? Choice overload consists of not being able to choose among several options, because due to an excessively high number options, people can no longer understand which option would be the best suited for them.

Regarding the first study to test choice paralysis due to overload, apparently it stemmed from a researcher noticing that although she loved going to a gourmet grocery store that had all kinds of varieties of all kinds of products, she never seemed to buy anything there. So, she decided to test the hypothesis that although people were attracted to having a high variety of products available to choose from, that same variety hindered purchase.

So, she and a fellow researcher conducted a couple of choice experiments to test that hypothesis, one of which is the now quite famous “jams experiment”.

Researchers conducted a choice experiment in which they placed a stand with jams in a store, and offered people to try the jams.

The jam stand alternated between having 6 or 24 types of jams available to try (all from the same brand), and researchers were trying to understand whether people were attracted to a higher variety of jams, but ended up being demotivated from purchasing due to that same increased variety. However, it turns out that the people who approached the 24 jams stand didn’t try that many more jams than the ones approaching the 6 jams one.

In both cases, people tried either 1, or 2 jams.

And, when later analyzing which potential customers actually did purchase, researches got to the conclusion that while 30% of the “6 jams customers” purchased, only 3% of the “24 jams” ones did. That’s a huge difference! So, while the larger variety did attract more potential buyers, it also decreased the likelihood of buying. It seemed like having more options to chose from overwhelmed people, leading them to a state of decision paralysis.

Now. Unfortunately, this experiment left a lot of open questions:

One, was whether people who stopped at each of the stands had different motivations to begin with; that is, the ones approaching the 24 jams might have been driven by curiosity, while those approaching the 6 jams actually wanted to buy jam.

Then, it might have happened that those approaching the 6 jams’ stand were unwillingly led to believe that those jams had been selected to be on the stand because they were more special than the other jams from the same brand; after all, when later picking the jams from the shelves to buy them, customers were faced with all 28 jams from the brand, and not only the 6 they had been shown.

And finally, it might have happened that those that had to choose among 24 jams thought that they didn’t have enough information to decide (especially in light of the small difference in the average number of jams tested).

Even in the 24 jams stand, people didn’t try more than 2. Probably they felt some kind of social pressure that prevented them from trying all the ones they would have liked to try. And they didn’t want to make a decision with what they felt was incomplete information.

Anyway, the researchers conducted two more experiments to get a better understanding of how the number of options affected the choice process and the choice-related motivation.

And one of those experiments was...

In that experiment, subjects were asked to select which chocolate they would buy for themselves.

Again, people were divided into groups. In this case, 4 groups. One group was asked to choose among 6 types of chocolate. They were then allowed to try the chocolate they had selected.

Another group was asked to choose among 30 types of chocolate, and again, allowed to try the chocolate they had selected.

A third group was asked to choose among 6 types of chocolates, just as the first group, but, allowed to try a random type of chocolate (it wasn’t exactly random, they were offered the chocolates selected by the people that were allowed to choose).

And the fourth group was asked to choose among 30 types of chocolate, and just as in the case of the previous group, was allowed to try an equally “random” type of chocolate.

Participants were then asked several questions regarding how they found the selection process, and finally, were given the option to select between two rewards for having participated in the study: either receiving $5, or a box of chocolates from the same brand, worth $5.

So… what were the results?

Regarding time to decide, unsurprisingly, the groups selecting among 30 chocolates took a lot longer to make a decision.

They also considered that they had been given too many options to choose from. And, regarding how well informed they felt when making the decision, all groups considered themselves to be moderately well informed, with no significant differences between groups.

Now… when it came to satisfaction regarding the decision process in itself, people in the 30 chocolates groups found making a decision significantly more difficult, and more frustrating. And, the two were positively correlated.

However, these people in the 30 chocolates groups also enjoyed themselves significantly more. And, there was no correlation between feeling frustrated or finding the selection process difficult, and enjoyment. And what happened in terms of choice of reward? (Meaning, who took the $5, and who preferred a box of chocolates?)

Well, 48% of the participants in the 6 chocolates group who tried the chocolate they had selected preferred the box of chocolates. Anyway, if you want all the details, I suggest taking a look at the studies (references down below).

So… this supports the idea that although having more product options is great when customers know exactly what they want, when they don’t, there can be such a thing as having too many.

It can make the purchasing process overwhelming, leading to choice paralysis, with the consequent purchase delay or even avoidance, for fear of making a non-optimal decision.

And you might argue that this can be sort of intuitive in the case of high involvement purchases, or in the case of products with some degree of sophistication, in which if you think of it, it does make sense that having more options can make it more difficult for potential customers to understand which option is the best for them, which could in turn make them delay or even if possible avoid making a (potentially wrong) decision.

But what people often resist, is the idea that having a high variety of products when it comes to low involvement purchases also deters purchase. Most people do not expect a high number of product options to have a negative impact on the purchase of such mundane products as jam (to be honest, personally I find these results very surprising).

I would expect undecided people to just buy 2 jars of jam. After all, these people were in a gourmet store in Menlo Park, California; they could probably afford to buy 2 jars if it really was that hard to choose. However, that does not seem to be what happens.

The fact was that even in the case of jam, having too many options had a surprisingly negative effect. A famous real-life example of this is the Head & Shoulders shampoo line reduction from 26 to 15 varieties, which resulted in a 10% market share increase.

So, the key take-away here is that although we do want to have some product variety to allow customers to choose (and allow us to target different segments, or to use marketing strategies such as bundling, or product tiers, etc.), when the amount of options makes it harder for people to identify which option is the best for them, the impact can be negative.

One important detail: another study showed that it does seem that having a higher number of products available within a given product line may have a positive impact on the customers’ perception regarding brand quality. The manufacturer is perceived as more of an expert in the field, leading to a higher likelihood of selecting that particular brand.

So… if not buying isn’t an option, the brand with the higher number of options available may have an advantage, even if selecting among its options is more dificult. But that’s not really what this post's about, so I’ll leave the details for another day! 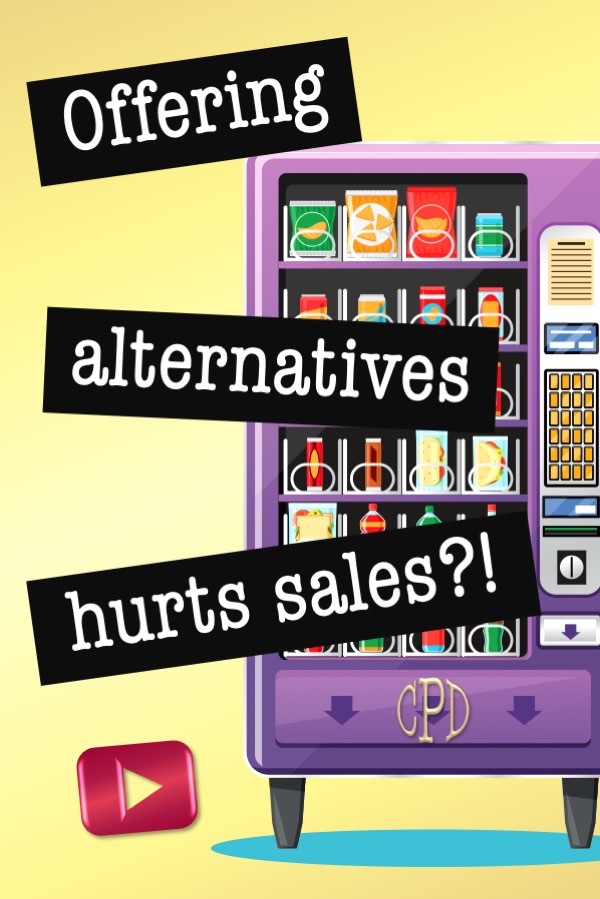 If you found this helpful, please help me share it with others who might benefit from it too: