As mentioned in my last video about the 5 counterintuitive but widespread product development mistakes, today I’ll go over some reasons why we shouldn’t be afraid of charging premium prices.

Ok, it’s always a bit scary, but I hope these arguments help getting over that fear.

So, this is the first video of a 3-post series about value selling. This week I’ll cover why you shouldn’t be afraid of charging premium prices, next week I’ll go over a couple of secrets that good marketers use to be able to sell high-priced products, and on the week after that, I’ll talk about what really sets the limit to what you can charge, and what you can do to change that limit upwards.

Now. To begin, a disclaimer. I’m talking about charging premium prices, assuming that your product or service delivers premium value. This is about capturing the value that you create, not about selling crap at high prices.

Anyway, now that that has been clarified, let’s start with reason number one for not fearing charging premium prices. And that is that...

Price is often seen as an indicator of value

You see, people often don’t buy the cheapest option, precisely because it is the cheapest. We grew up hearing that you get what you pay for. Therefore, when we can’t judge a product’s value objectively, we often assume that if we go with a cheap option, we must be getting a crappy product.

And this belief can be so strong, that it has been found that price can even have a placebo effect, thus changing the actual efficacy of the product.

In fact, for example in the healthcare area, there’s a belief that patients knowing that the treatment they’re taking is a lower priced one, may actually have a negative impact on drug effectiveness.

One interesting study on this topic was published in a letter to the editor in the Journal of the American Medical Association, where researchers disclosed the results from a study they had done, testing whether telling people that the pain-killer they had been given had been purchased at a discounted price, would have an impact on the pain-relief test subjects experienced. But, half of the participants were told an additional thing: that the drug’s price had been discounted from the $2.5 per pill, to $0.10 per pill. And they weren’t told why. And an additional detail: they all actually got placebo. You can see all the details in the original publication; I’ll leave the reference below.

Now. If you’re thinking that people self-reporting their level of pain (which is just a perception and can be easily swayed), isn’t really an indicator that the price discount had an actual impact on the efficacy, I get it.

Actually, I’m right there with you. I have worked on projects for drugs being developed for pain relief, and I am fully aware that pain relief is particularly sensitive to placebo effects, just as depression and anxiety are, so this could be just a perception. In any case, it is still very interesting in terms of analyzing how price impacted the perceived quality of the product.

But, this isn’t the only study showing that the price of a product can have an impact on its efficacy. And the one I’m going to describe next didn’t just measure perceptions. It measured the actual ability to solve puzzles.

So, in one of the experiments that they conducted, researchers told people that they were trying to assess the efficacy of an energy drink in improving mental performance. Participants were also told that the energy drink had a retail price of $1.89. Participants then tried to solve as many puzzles as possible within a timeframe.

But there was an additional difference in the participants’ groups, which was that half the people in each of the previous two groups just had to solve the puzzles, while the other half had to answer two additional questions before starting working the puzzles: they had to rate their expectations regarding the energy drink’s efficacy in improving their mental acuity.

The researchers’ hypothesis here was that forcing people to think about their beliefs regarding the drink’s efficacy would solidify those beliefs.

So, participants were actually split into 4 same-sized groups, according to whether they had been told the energy drink’s price was retail or discounted, and whether they had to reflect about their beliefs regarding the efficacy of the product before solving the puzzles or not. Additionally, there was a control group in which participants just solved the puzzles, without being told anything about or consuming the drink in question. You know, just to have something to compare the results to.

And the results were:

So… participants that paid for the drink at its regular price thought it would provide more value than did those who paid for it a discounted price. That’s already interesting. But it gets better. Let’s now look at the actual efficacy.

So, the control group (who was oblivious to the whole energy drink thing) solved an average of 9.1 puzzles.

Participants in the regular price group, who didn’t have to reflect on their beliefs regarding the drink’s efficacy, solved 9.5 puzzles.

And participants in the regular price group who had to answer the questions about their expectations regarding the drink’s efficacy solved 9.9 puzzles. So… there is a slight difference among groups, but small.

However, when we look at the results achieved by people who were told that the drink had been purchased at a discount, things get really interesting.

Participants in the discounted price group, who didn’t have to reflect on their beliefs regarding the drink’s efficacy, solved an average of 7.7 puzzles.

While participants in the discounted price group who had to answer the questions about their expectations regarding the drink’s efficacy solved only 5.8 puzzles. So, being told that the drink was cheaper, had a major negative impact not only on its perceived value, but also on the actual efficacy of the energy drink.

That’s how powerful the impact of a low price can be: it influenced not only the perception about the product’s value, but the value itself!

And that’s why when doing market research about pricing, I believe we should ask the question “what is a price that’s so low, that it would make you think that the product is a poor quality one”. Because while you may think people will realize that you are offering an amazing value for money, they may just be thinking “if this was any good, it would be more expensive”.

But that’s not what this post is about, so if you want more details on pricing questions to ask during market research, make sure you read my post about that topic.

Now. There’s a lot more to this study than what I’m summing up here, so if you’re interested in this subject, I recommend you take a look at it. The reference is below.

Anyway, it’s now time to move on to the second reason why we shouldn’t be afraid of charging premium prices: and it is that...

To get to the same profit, we have to sell less units

This one should be obvious, but it seems to be surprisingly easy to overlook. People sometimes seem more interested in selling a lot of units, than on making a profit. I mean… getting one “no” after the other is hard and may even make you wonder whether there’s something wrong with your offering; also… nobody likes being rejected, so it can be hurtful. But businesswise, it could actually be for the best.

And let’s consider 4 potential scenarios regarding variable costs per unit: $0 (a bit unrealistic, but let’s say we’re talking about a digital product that you don’t even have to advertise), $30, $50, or $80.

This would result in the margins I’m inserting in the table for each of the 4 potential price points. This means that if you want to make $1,000 from this product, and your product had no variable costs, and it was priced at $250, you could reach that target by selling just 4 units. However, if it was priced at $100, you’d need to sell 10 units.

And this effect increases as your margin per unit decreases. And remember that we’re just talking about points of indifference in terms of margin. If what you’re selling entails a service, serving 6 customers or serving 50 isn’t quite the same. Even if you make the same margin, your day to day life will be a bit… different.

A note of caution here: I’m not saying that it’s equally likely to sell 6 units for $250 than to sell 50 units for $100. Assessing how many units can be sold at each price point is a completely different analysis.

In fact, overpricing and underpricing are just as bad profit-wise. That’s not what this post is about though, so check out the one I’m linking about it if you’d like to know more.

Today’s post is about our fear of charging premium prices, so my point here, is that sometimes, being willing to sell less units, for a higher unit price, may be worthwhile. The takeaway isn’t that overpricing is a good idea (because it isn’t).

The takeaway is that underpricing so that nobody complains about your prices isn’t any better than being rejected because our product is expensive. Our goal shouldn’t be to avoid hearing a “no, that’s too expensive”. Our goal should be to optimize profit.

Anyway, finally, the third reason why we shouldn’t be afraid of charging a premium for our premium products or services, is that...

When clients get a high level of service or product quality at a given price, they will expect to get the same high levels in the future, at the same price

The issue is that when we provide insane amounts of value for cheap (or sometimes even for free), unfortunately what we’re teaching our clients is that they can get us to deliver that insane amount of value for a low price.

And they’re likely to come to expect it in the future.

So, there’s a real risk that what was once perceived to be outstanding value for money, becomes just… normal. And, depending on your business, raising prices or starting to charge for something that you used to provide for free may not be easy at all.

So, don’t be the one educating people to have a low willingness to pay, and/or unreasonable expectations, because you may later have a very hard time trying to get them to accept that the superior value you provide should have a price tag on it.

Be especially careful if you’re selling to businesses, because even if your client is a perfectly reasonable person that  understands that you should be charging more, his or hers professional worth may be tied to being able to keep your prices low, making it extra hard to achieve even deserved price increases.

Anyway, that’s it for today! As said, in next week I’ll talk about the copywriting secret that is needed to be able to sell high-ticket products or services, and in the week after that, about whether there is a price ceiling that limits what you can charge, under which circumstances that ceiling can and can’t be broken (it may not be as hard as you think), and what you can do to break it.

See you in the next one! Bye! 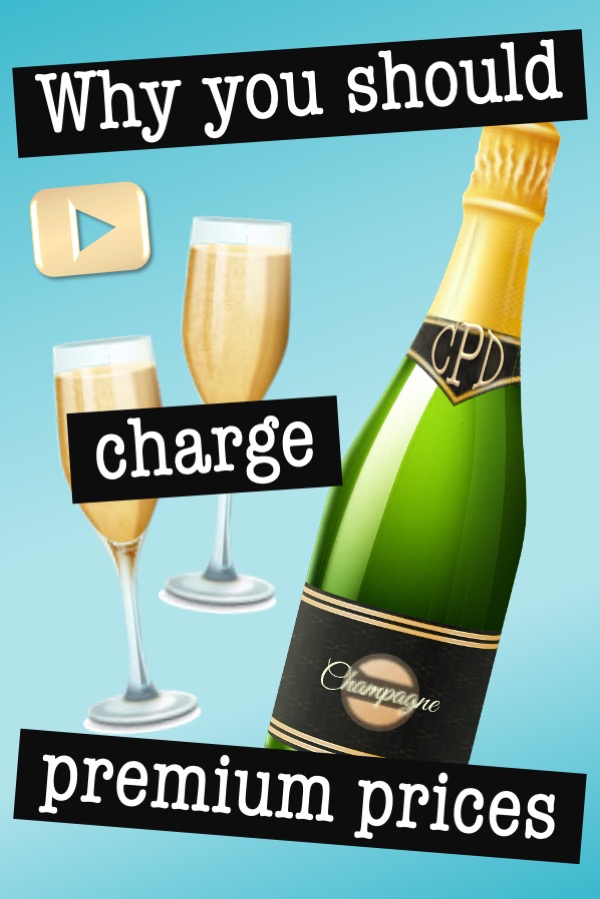 Hi! I'm Andrea, and I specialise in incorporating market research and marketing strategy into product development, in order to make sure that the final result is a product that target customers want to buy at a profitable price.

Optimal price: why “better erring on the high side” is wrong

Pricing methods: cost-plus pricing, competitive pricing, and value based pricing. Which is best?

Market penetration pricing strategy: what is it, advantages, and potential pitfalls

Value-based pricing strategies: What sets the limit to what you can charge